Storytelling in the Age of Emojis

Weaving words together to create pictures in the minds of jurors – true storytelling – has long been the foundation of successful trial lawyers.  But why stop with words alone?  Adding actual images to a presentation further enhances jurors’ ability to understand and remember case themes.  These images can resonate across age, gender, beliefs, and individual experiences.  Lawyers have been taking advantage of visuals for decades.

However, lawyers must adapt the images they use, and how they use them, in order to stay relevant to the modern juror.  Once upon a time, a single image on a slide could often do the trick; an attorney could display and discuss an iceberg, for example – a handy metaphor for the context and details hiding below the surface of your opponent’s over-simplified version of the story.  But today, that’s not enough.

It is now commonplace to communicate using technology, with an emphasis on brevity; the average juror frequently sends and receives images that immediately convey a story.  One might send a message to a friend or colleague containing icons of an airplane and a thumbs-up, followed by a question mark; we would all likely recognize this shorthand way to say, “Did your flight go ok?”

Figure 1: Icons are the new norm

Indeed, in few ways is our societal progression more evident than with the ubiquity of such “emojis.”  Emojis, a term for the broad set of digital icons (literally “picture characters” in Japanese) such as the aforementioned airplane and thumbs-up, have grown from a novelty into a standard means of inter-personal communication.  They’ve been embraced and accepted across multiple generations.

So, while using pictures and icons in trial graphics certainly isn’t new, the widespread social use of emojis serves to broaden your catalogue of icons and expand your storytelling ability in the courtroom.  If you want to communicate most quickly, accurately, and effectively with jurors, then knowing when and how to use icons in your arguments is a must.

Why Should Emojis Influence Your Trial Graphics?

Since jurors so frequently use icons in their own lives, attorneys should be encouraged to incorporate icons more frequently into their presentations.  By matching what jurors have come to expect, your trial visuals will feel more familiar, relatable, and modern.

And why are icons so helpful in the first place?  There’s a lot of psychology that goes into answering that question, but we’ll just start by saying that humans are “cognitive misers.”  That is, the less work our brains have to do to figure out what someone is trying to say, the easier it is to pay attention, and the more likely we’ll understand and remember.

In fact, studies show that reading text or hearing speech is not particularly efficient; a juror must first process the words they see or hear, and then parse out the meaning behind those words – these are separate brain functions.  Icons help to bypass that mental middleman and cut straight to the point.  They create mental shortcuts.

Here are some of the major benefits of icons:

Icons can tell a story, tell it quickly, and tell it memorably.

Icons can clean up your graphics and replace sprawling, wordy entries with simple pictures.

Why write, “For two years no complaints were filed” when you can simply cross out “complaints” with a big “Ø”?  Why type out the words “document,” “email correspondence,” and/or “phone call” when you can represent them with a small icon?  (This technique works particularly well for streamlining busy timelines).

Icons don’t have to replace text altogether; they can augment it, too, working to emphasize or clarify it.  Indeed, even simple concepts can be made more digestible with a quick clue-in using an icon.  In Figure 3, for instance, various icons help jurors understand when and why project delays occurred. 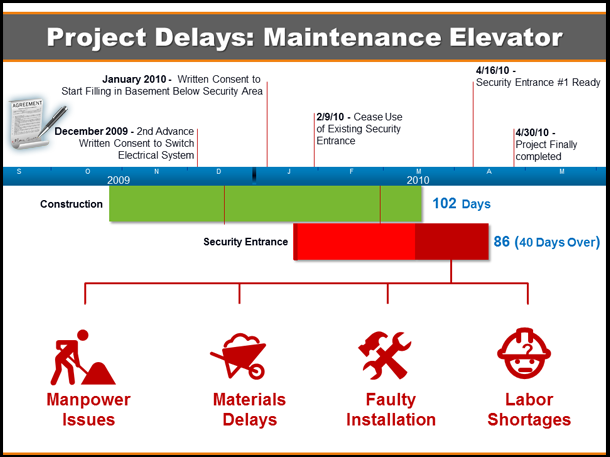 Figure 3: Icons in a Timeline

Challenges with Using Icons or Emojis in the Courtroom

Icons do come with a few caveats, however.  Especially if your graphics begin to use them more often and feature them more prominently.

To be clear: you’re not looking to copy all the hippest, newest emojis.  You want the icons you use in trial to be as concrete as possible.  You want to be able to make a very safe bet that your jurors will recognize and understand what you’re presenting.  Furthermore, because icons can convey feelings and subjective meanings, and these meanings can evolve, they run the risk of being misunderstood by jurors.  Depending on a juror’s personal experiences, some can even be seen as offensive or uncomfortable.  This can limit the pool of useful icons, or force you to be aware of small details that might complicate your message with unwanted connotations.

Remember also that opposing counsel can object to your images.  I recall one trial in particular: In describing a factoring of accounts, we had juxtaposed our opponent as a large company by representing them with an icon of a large building.  Opposing counsel vigorously objected to the image, and while we ultimately prevailed and were able to keep it, it was a very close call.  Being mindful of this risk will help you choose icons with potential objections in mind; it’s also wise to keep an alternate version of certain graphics ready as a backup.

Some Proven Icons and Emojis for the Courtroom

With those caveats in mind, here’s a look at a number of icons that tend to be very effective.  They have strong, universal connotations and are thus ideal for your purposes.

Icons and Emojis Used in a Flow Chart

Jurors often struggle to visualize complicated systems and processes if they’re explained with words alone.  So, much like people in the present day frequently communicate with only pictures, you can use icon-heavy graphics to walk them through unfamiliar or complex concepts and reduce their mental load.  Flowcharts can be the perfect place to take this approach.

Example: The image in Figure 4 (below) utilized plenty of icons to simplify the dense medical care system.  With minimal text, we were able to compare those receiving health insurance from an employer with those on Medicaid, and guide jurors along each step.

In the image on the top, a “company sign” and suited people icons quickly represent patients’ employers, with a variety of “patients” underneath.  The building to their right even includes a “shield” icon to highlight the protective nature of the insurance company.  Meanwhile, small bits of text near each icon ensure that they are interpreted correctly and clearly.

In the bottom, a viewer can then easily see the Medicaid differences, given the removal of the employer icons and replacement of the insurance company building with a government building (note its highly-recognizable domed top).

To explain further, we have an animation in which the people were shown moving through the system, either to hospitals and clinics directly, or after first visiting with a private practice doctor.  Animated “$” icons were then used to demonstrate the flow of money to each party in each example. 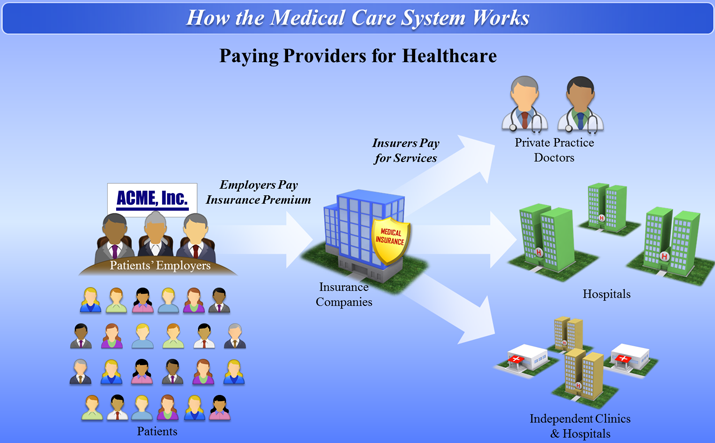 Note that the people icons we used don’t have faces; as discussed previously, this was deliberate.  We didn’t want to associate any sort of emotional cues with these images.  They were there purely to teach jurors about the system, not to encourage jurors to expend any time or thought as to why the people had happy, sad, or straight-faced expressions.

Whether they’re tried-and-true courtroom staples or inspired by present-day emojis, icons can greatly boost your storytelling power and strengthen your case.  We know that being a truly effective trial attorney is as much about building a case as it is about playing to your audience; so, if jurors are constantly relying on pictures to connect outside the courtroom, it’s time to begin speaking to them in this new language.

A version of this blog first appeared on law360.com